First seen in the episode “Into Etheria”

The Whispering Woods is a huge, enchanted forest that stretches from Bright Moon, all the way to the village of Driall and then right to the edge of one of Etheria’s Twelve Oceans. A lot of what goes on inside the Wood is hectic, but it is so big that peaceful places are not that hard to find either.

It is one a very few places on Etheria where the Horde does not rule and cannot even cause any trouble, thanks to a spell cast upon the Woods by the First Ones, the founders of Etheria, which keeps any villains out. The pink bushes and purple trees are the general make-up of the forest itself and many of the Rebels reside here. 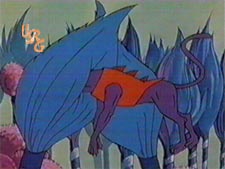 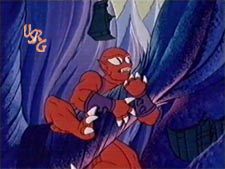 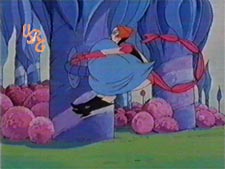 It seems as though the forces of evil only stand a chance when getting an innocent person like Peekablue [80] or Spinnerella [78] to do their dirty-work – both of these Rebels have allowed the Horde with some sort of access to the Rebels’ home, but presumably as they had no control over their actions, the trees could not force them out. A few times, however, a writer has idly forgotten about the Whispering Woods’ golden rule – Imp, Shadow Weaver and Hordak have all been seen inside the Wood, unaccompanied by a Rebel.

Walking through the forest, you may come across the odd toadstool, forest animal or even a waterfall before reaching the main camp in Whispering Woods. This is where the Rebels gather, both for shelter and for planning attacks on the Horde. Adora is leader of the Great Rebellion and often stations herself inside the main tent, marked with a symbol of an angel, presumably one to represent hope and goodness. It is here that ambushes are prepared. 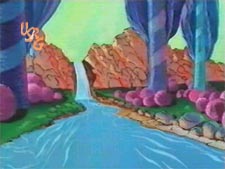 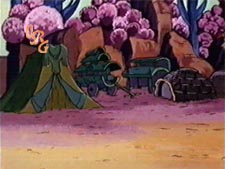 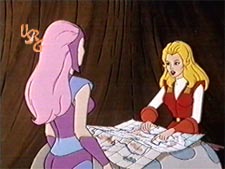 Most of the Rebels seem to live in the tents in Whispering Woods’ camp. Madame Razz, however, has her own personal palace in an unknown location in the forest. It’s almost as though she has lived there for years, as a signpost directs us to her house, with the owner’s face clearly illustrated on it. The cottage is where she concocts various potions in her cauldron, but is only seen twice in the series. It’s a very old house, much like the witch herself, with wooden floorboards and seems to have been built from old tree bark!

As well as being home to the vast amount of human Rebels, as well as Kowl, Madame Razz and Broom, the Whispering Woods houses the Twiggets, a race of plant-like people, who not only live there but react to the goings-on in the Woods. The climate is warm, so they can presumably thrive on the temperature and sunlight – and when the Woods are in danger, the Twiggets feel the full effect and become victims of whatever peril faces the forest.

Something that proves useful if any casualties occur is the Medical Tent, where the sick are nursed back to full health. This, however, doesn’t stop at just the Rebellion – as well as the Twiggets, Hordak and Horde Prime’s son, Prince Zed, have been permitted in the Medical Tent, due to ill health. It is only when the Horde are powerless that they will co-operate with the Great Rebellion, and the Rebels are only happy to assist.

The Woods’ are possibly Etheria’s most beautiful location and is easily one of the oldest. This place of natural tranquility gives Etheria some hope of overcoming the Horde – moreso than any fortress or castle, quite simply because it is the only place the freedom-loving people of the planet can reside in full peace and harmony. 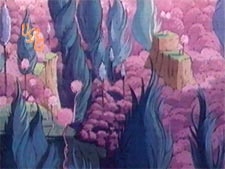 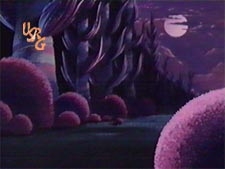 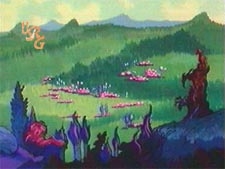 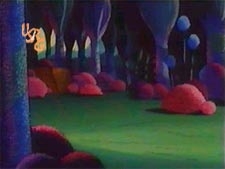 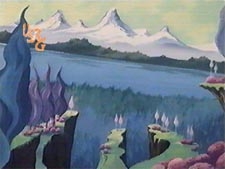 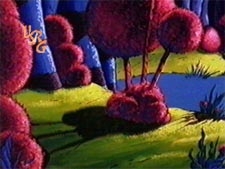 Into Etheria
Beast Island
She-Ra Unchained
Reunions
Battle for Bright Moon
Duel at Devlan
The Red Knight
The Peril of Whispering Woods
King Miro’s Journey
Friendship
He Ain’t Heavy
Return of the Sea Hawk
Horde Prime Takes A Holiday
Enchanted Castle
Three Courageous Hearts
The Stone in the Sword
The Crystal Castle
The Mines of Mondor
Small Problems
Book Burning
The Eldritch Mist
Bow’s Farewell
The Price of Freedom
Play It Again, Bow
The Reluctant Wizard
Friends Are Where You Find Them
A Talent for Trouble
Troll’s Dream
Treasure of the First Ones
Glimmer’s Story
Enemy With My Face
Welcome Back, Kowl
The Rock People
Huntara
Micah of Bright Moon
The Price of Power
Birds of a Feather
Just Like Me
My Friend, My Enemy
The Wizard
Unexpected Ally
Loo-Kee Lends a Hand
Of Shadows and Skulls
Flowers for Hordak
Wild Child
The Greatest Magic

One To Count On
Return Of The General
Out Of The Cocoon
A Lesson In Love
Something Old, Something New
Loo-Kee’s Sweety
The Time Transformer
Above It All
Brigis
The Caregiver
When Whispering Woods Last Bloomed
Romeo And Glimmer
The Perils Of Peekablue
Just The Way You Are
Shera Makes A Promise
Bow’s Magical Gift
Sweet Bee’s Home
Glimmer Come Home
The Inspector
Portrait of Doom
Hordak’s Power Play
Shades Of Orko