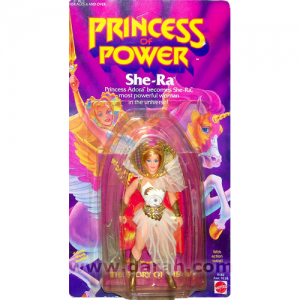 She-Ra has always and always will be my favorite. I grew up playing with the toys, watching the cartoon, and drawing the characters. Now that I am an adult, I still love the series, and this site will serve as my tribute to The Best Female Action Figure Ever!

Click the menu or the links below to see these lovely dolls.

She-Ra first made her debut on television in 1985, after the success of He-Man. She is his twin sister, separated at birth. Her real name is Adora, raised by the Evil Horde and brainwashed by Shadow Weaver. He-Man travels to Etheria to find her, and once she breaks the spell, she holds aloft her magic sword and says, ‘For the honor of Grayskull, I AM SHE-RA!

The toyline ran from 1985-1987 and produced two full waves. The third wave made it to the prototype stage, but not all of them were produced, so we only have pictures of the Star Sisters. The rest of the third wave is so rare, that they are very expensive to collect.