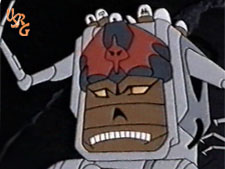 Image taken from the episode “Shades Of Orko”

Dylamug is a vicious Horde cyborg.

Believe it or not, the rarely-seen Dylamug was the first villain to appear in the She-Ra series. (if the parts from The Sword Of She-Ra are discounted) Leading a band of Horde Troopers to collect taxes from a village, [06] he acted as leader of some sort of robot hierarchy. However, the series soon cast a blind eye over Dylamug and his two further appearances would be brief at best.

Click here to read about The Briefest Cameo In All Etheria! 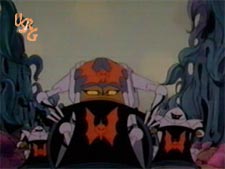 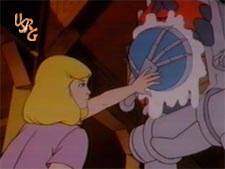 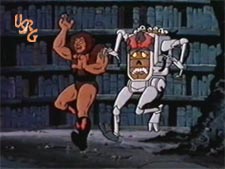 Dylamug’s first appearance established him as a malevolent, heartless villain, almost on a par with Hordak’s character in early episodes. He didn’t seem to care who his victims were, as long as they ended up bowing to the Horde; he shamed a villager in front of the townspeople and attempted to ‘pie’ a young girl. (who incidentally had the last laugh) Later in the episode, his voice was altered slightly by Lou Scheimer, so he sounded just like another one of Hordak’s Troopers. His third speaking-part not only provided him with a third different voice but also a completely changed character. In late Season Two, he was shown teaming up with Grizzlor to capture Orko’s shadow which was running loose at Horror Hall. Dylamug seemed to be afraid of Shadow Weaver, like some of the other Horde henchmen, and was also portrayed as a simple dunce, like Leech and Grizzlor. [90]

Dylamug has the ability to shoot lasers from the large Horde symbol on his forehead, powerful enough to stun even She-Ra. [06] So, whilst this power was rarely shown, it makes Dylamug a dangerous adversary for the Rebellion. 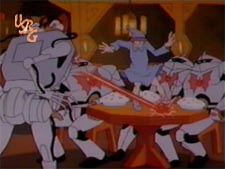 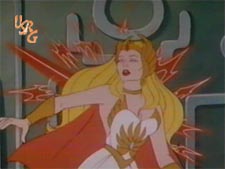 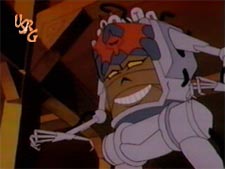 Finally, Dylamug’s mechanically changing facial expressions should be acknowledged – particularly his creepy grin. This was shown because a ‘dial-a-mug’ action feature would have been the character’s gimmick had he been released in the Masters of the Universe toyline. Sadly, the figure was scrapped, which could explain his infrequent appearances.

The Inspector
Shades Of Orko