Featured Image cropped from the episode “Romeo And Glimmer”

Entrapta is a malevolent Horde technician – and one with killer braids, at that.

Entrapta, originally designed as Catra’s partner-in-crime for the Princess of Power toyline, was the sole new addition to the Horde ranks in Season Two. However, with such a non-threatening design, Entrapta’s purpose and abilities were tweaked a little for the TV series. Instead of capturing people in her plaited locks – as was intended for the figure – Entrapta was reimagined as a designer of hyper-sophisticated machinery for the Horde – and to tie in with the name, traps were her forté. Strange, grappling mechanical tentacles, [66] a magnetic force-field prison [66] and a huge Trapper Tank [79] were the three inventions she showed off in the series. 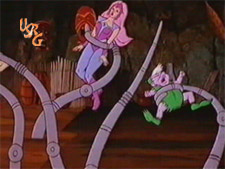 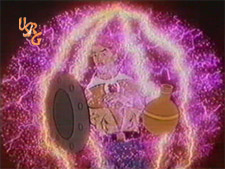 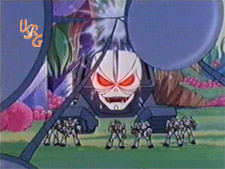 However, the writers did not entirely neglect the concept of Entrapta’s hair-snaring talents. Don Heckman wrote Entrapta as a manipulative, conniving villain and showcased her ability to control her inventions with her hair. He even gave her a real shining moment when she attacked Imp with them [79] – and, in turn, added her to the long list of Hordesmen who despised him. 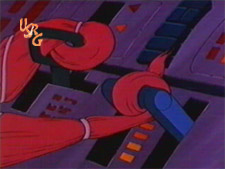 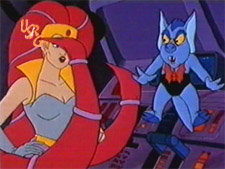 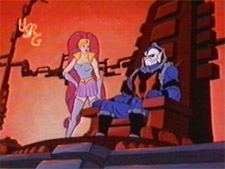 One thing that does seem slightly odd is Entrapta’s position in the Horde hierarchy. Whereas villains like Grizzlor, Leech and Scorpia were always shown looking up to Hordak from the ground floor of his throne room, Entrapta – who only even spoke to Hordak in one episode – was granted the prestige of standing beside her master at his level. For a supporting character, this is quite an honour. (The only other characters to achieve such a feat were series regulars Shadow Weaver, Catra, and Imp) Entrapta presented herself as a cunning, intelligent character, which makes this supposed status believable, despite her infrequent appearances. If we had seen more of her, undoubtedly we’d have gotten a better picture of her abilities and her potential contribution to the Horde.