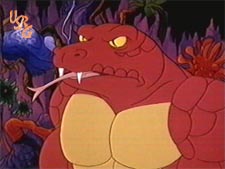 First seen in the episode “The Prisoners of Beast Island”

Rattlor is the Horde’s most outspoken member, but generally just another henchman for Hordak.

Like his venomous-counterpart Tung Lashor, Rattlor was originally created as a side-kick for King Hiss, leader of the Snake Men, a tribe set on conquering Eternia, home of He-Man and the Masters of the Universe. However, supposedly due to toy-marketing reasons, they both ended up on She-Ra, amongst Hordak and his Evil Horde. Rattlor would always be assigned minor roles, often to capture someone [18] or to lead some Horde Troopers into battle [82] – presumably because of his limiting power – more on that later. 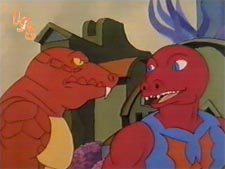 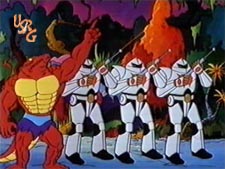 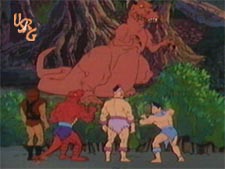 Rattlor could have been treated like Grizzlor – as a total buffoon. Fortunately for him, he never said enough to particularly irritate anyone, even Imp. In fact, he was given such little dialogue in the show that some writers seemed to think he was designed to be mute, [10, 26] with his only form of communication being through his rattling tail. [26, 57] This was supposed to be his power – to distract the unsuspecting opposition whilst other members moved in to attack. However, it was only put to good use once, when the sound terrified The Great Beast, a dinosaur-like creature living on Beast Island, to
cause him to run riot and help the Horde to capture Adora. [57]

However, just as his tail seemed to have helped him in a situation, as soon as he crossed paths with She-Ra, it became his downfall. He was treated to a similar fate as Scorpia, as She-Ra simply picked him up and tossed him away like a rag-doll. [57] 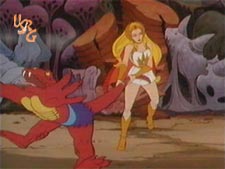 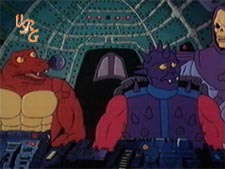 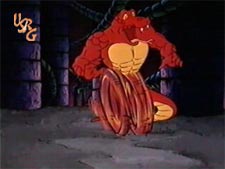 His alliance with the Horde is also something that needs questioning. We already know of his addition to the Snake Men, but who would have thought he would also cross over to Skeletor’s side? At a very unexpected point, Rattlor suddenly appeared alongside Webstor, Two Bad and Spikor in Skeletor’s Collector, causing a huge amount of controversy. [He-Man and She-Ra: A Christmas Special] The reason for his allegiance with more than one side is as yet unknown.

Finally, through all his rough ‘n’ tough exterior, Rattlor is really a pussycat. Being scared of an ambush of laser-beams is quite understandable – as is the onslaught of a very angry Shadow Weaver. But Sorrowful the Dragon? [10] Never saw that one coming, did you?

The Locket
Shades Of Orko