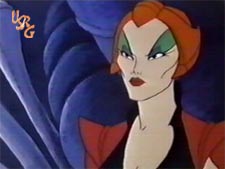 Featured Image taken from the episode “The Anxious Apprentice”

Scorpia is an evil scorpion-creature, assisting the Horde but residing in the derelict area of the Crimson Waste.

Hordak’s once-proclaimed speech about Horde science and magic [45] can also be applied to Scorpia, as well as Mantenna, Grizzlor, and Leech. No full origin is given for this character, only this one brief hint. However, Scorpia is perhaps the one out of these with whom this theory can be associated with the least, as she has a home shaped like a scorpion in which a throneroom also exists. Shown in but two episodes [37, 45] it indicates some sort of reign, if only of a small division of Etheria, much like Shadow Weaver and Frosta, living at Horror Hall and Castle Chill respectively.

She also has slaves operating at her home in the Crimson Waste, again, assuming the idea of a powerful figure. [37]

Ultimately, however, Scorpia was just another Horde creature and another member of Catra’s Force Squad. Needless to say, the two rarely got along [25, 44, 54], uniting only to save themselves from the wrath of Hordak in one episode [45] and try to get rid of Imp once and for all in another. [56]

Scorpia is another of the characters originally to be portrayed as a strong asset to Horde ranks. By trapping Bow [01], Adora [08] and a runaway prince [24], she seemed to be one of Hordak’s most formidable warriors. However, the powers of a scorpion must have been considered too harsh by the censors and so Scorpia’s abilities to sting with her tail and tear flesh with her pincers were never explored, though the former would be used to capture [08, 24] and the latter to threaten [01] and express anger. [42]

Her tail would also often be her downfall – see how easily She-Ra discarded with the villain simply by tossing Scorpia away by her most fearsome weapon in three episodes. [08, 17, 37] To add to such ridicule, Scorpia was cursed with an intelligence issue, in that she didn’t seem to have much. Thinking she could control all the powers of Mysticor, Scorpia failed to impress by releasing the evil of the Forbidden Zone [37] and also let Bow into the Horde’s secret factory at Smalloak after believing him to be a dishy inspector. [25] However, to contradict this, she also once claimed to have created an all-powerful weapon that even She-Ra could not stop [42] – but, of course, she did.

Finally, Scorpia’s apparent bad-luck issue, as far as character design and organisation are concerned, was aided by a seemingly powerful scorpion-shaped tank, called the Crawler. Scorpia is the only Horde-warrior to have been specifically given such a vehicle, with such powers as treading sand beneath the surface [45], delivering a sleep-ray from its tail [45] and removing rocks from a sealed, mystical entrance. [34]