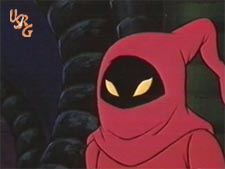 Featured Image taken from the episode “A Lesson In Love”

Shadow Weaver is the Horde’s evil sorceress, full of the knowledge to overthrow Hordak and even perhaps conquer Etheria.

Shadow Weaver was originally a second-rate sorceress from the Kingdom of Mysticor [17], now home to Castaspella. Hordak found her and granted her the opportunity of having great power shortly after the Horde arrived on Etheria. She was a student of Norwyn, a great Etherian sorcerer, whom she betrayed to Hordak. The ruler of the Horde managed to beat Etheria’s last hope of freedom thanks to Shadow Weaver’s treachery and in return, she was given a power gem that made her powerful beyond imagining. However, before she could absorb all of its power, Norwyn destroyed the rock, leaving Shadow Weaver only semi-powerful – so she left to join the Horde, as they had control over the planet. [47] 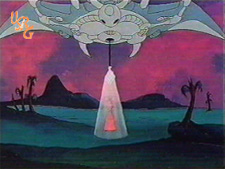 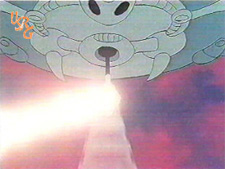 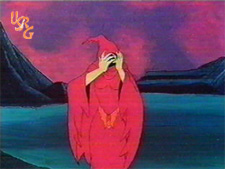 Given this evidence, it seems that Shadow Weaver could have been so unbelievably powerful. A lot of the Horde’s greatest efforts at conquering the
planet and beating She-Ra have come from the brains of the Horde witch, so if she had taken all the power that the gem had to offer, this woman could have been unstoppable. Mind spells over Adora [01, 02, 03], a young boy [69] and Peekablue [80] all proved strong weapons against the Rebellion and all were ideas of Shadow Weaver. 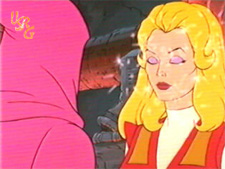 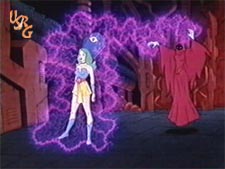 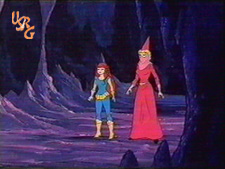 However, there is one woman who knows Shadow Weaver’s magic as well as she does – Castaspella. [48] The two used to be good friends, as a flashback implies [47] and a show-down proves. [27] The big difference, however, as Norwyn pointed out, is that Castaspella worked for her far superior power, whereas Shadow Weaver took a short-cut, which didn’t help her much as is.

Shadow Weaver is one of the few Hordesmen who is shown to have a home away from the Fright Zone. Although she has chambers at the Horde’s main base [11, 27, 77], she most often resides at Horror Hall, in Etheria’s darkest regions. There she is at her most powerful, with slaves to aid her and a titanic cauldron to allow locations to be traced [40], communication with other worlds [56] and demons to be brought forth. [90] 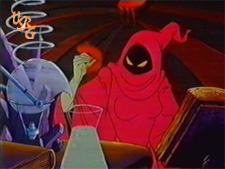 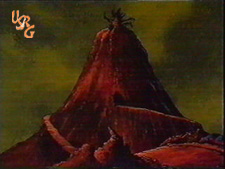 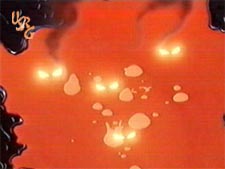 Her relationship with Hordak is one with many levels. On one, he would seem very appreciative of her contribution to the Horde army, mostly in early episodes [02, 03, 15] and on another he would steal the ideas of the Horde witch and make them his own [49, 63, 93] On the better occasions, Shadow Weaver would also stand with Hordak atop his throne-area, indicating her place in the Horde hierarchy. Such a feat would only ever be matched by Imp and attempted by Catra and Entrapta. 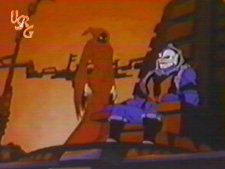 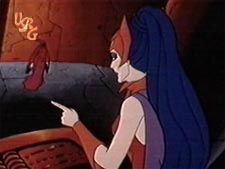 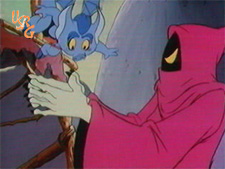 Her hatred of machinery [17] would almost match her dislike for her fellow-Hordesmen. It would seem that most of the Horde villains would work better alone, and Shadow Weaver is no exception – she and Catra weren’t the best of friends [39] just as she and Grizzlor always failed to see things eye to eye. [84] However, one thing she did have in common with the other villains was the rivalry with Imp, who, more often than not, enforced Hordak’s solutions to his problems – most often involving Shadow Weaver. [40, 55, 56] 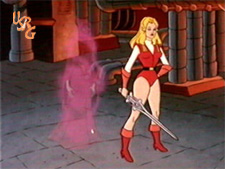 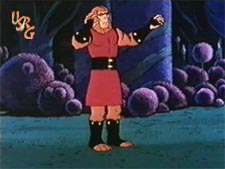 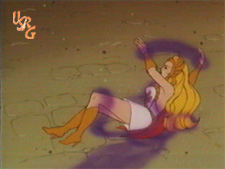 To add to these powers, Shadow Weaver also has extensive knowledge of the goings-on in and around Etheria, clearly due to her desire for power. She
knew of the magical wizard who lived in a tree being enchanted [31], foretold Mystic Isle’s rise from beneath the sea [40] and was the only Horde member to have heard of the legend of Unicorn offspring who have to be born on Unicorn Island. [93]

Sure someone so powerful would have weaknesses though? Besides She-Ra and Hordak, the two main people holding her back, bright lights also affect Shadow Weaver. [42, 44, 47] However, easily the most peculiar fact about Shadow Weaver is the fact that she has a butterfly collection [69] – ironically at Horror Hall, the so-called scariest place on Etheria!

Into Etheria
Beast Island
She-Ra Unchained
Reunions
Battle for Bright Moon
The Sea Hawk
The Peril of Whispering Woods
King Miro’s Journey
Friendship
He Ain’t Heavy
A Loss for Words
Three Courageous Hearts
The Stone in the Sword
The Crystal Castle
The Crown of Knowledge
The Mines of Mondor
The Eldritch Mist
The Reluctant Wizard
A Talent for Trouble
Troll’s Dream
Gateway to Trouble
Into the Dark Dimension
Treasure of the First Ones
Enemy With My Face
Welcome Back, Kowl
The Rock People
Huntara
The Price of Power
Birds of a Feather
For Want of a Horse
Loo-Kee Lends a Hand
Of Shadows and Skulls
Darksmoke and Fire
Flowers for Hordak

A Lesson In Love
Something Old, Something New
Loo-Kee’s Sweety
The Pearl
Above It All
Brigis
The Caregiver
When Whispering Woods Last Bloomed
The Perils Of Peekablue
The Locket
Bow’s Magical Gift
Sweet Bee’s Home
Glimmer Come Home
Portrait of Doom
Hordak’s Power Play
Shades Of Orko
The Bibbet Story
Swifty’s Baby

As seen in the episode “The Peril of Whispering Woods”

Styrax is seemingly a pet of Shadow Weaver’s.

Horde pets were an issue that Filmation rarely dealt with. As long as Imp isn’t counted as one of them, it is only definite that two Horde members petted
animals – Catra and Admiral Scurvy, with Clawdeen and Squall respectively. 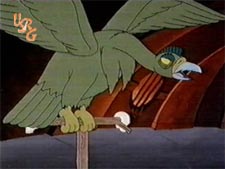 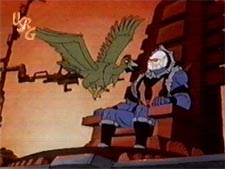 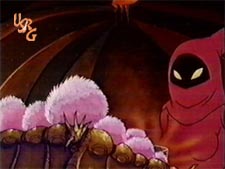 Styrax would fall into this category – except his role as a ‘pet’ is never confirmed. In his single appearance in the show, he simply stood by Shadow Weaver in her chambers at the Fright Zone and then went to inform Hordak that the potion to destroy the Whispering Woods had been prepared. [11] After that, Weaver’s chambers would make but two further appearances, though Styrax remained a singular-appearance character.

The Peril of Whispering Woods