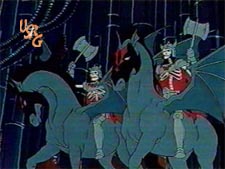 Featured Image taken from the episode “The Price of Power” 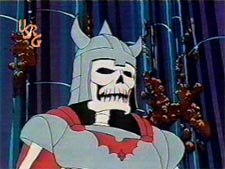 As seen in the episode “The Price of Power”

The Dark Riders were a group of evil Skeleton-warriors, who were accompanied by their flying Horses.

Limiting their appearances to one episode, The Dark Riders were the creation of Shadow Weaver. 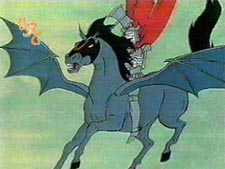 They were sent to attack She-Ra and Madame Razz and quite honestly did a pretty poor job of it.

Madame Razz tells us that no spell can defeat them, as they are too powerful – but we aren’t quite sure where their power comes from or indeed what they could do with it. 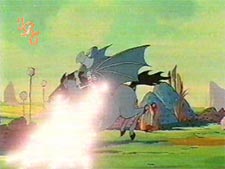 The Skeletons each wield an ax and the Horses buck and swoop in the air – yet no particular strength is shown.

To counteract their ‘power’ both She-Ra and Madame opt to outwit the menaces with tactical thinking rather than strength – it seems that the only way to destroy them is to make them explode, something that our heroines pulled off by heading for the ground and then pulling up at the last second.

The Dark Riders, with no time to turn, simply crashed head-first into the earth below and were no more. [47]

It is possible that these beasts were the result of a one-off spell cast by Shadow Weaver, but the actual reason for their sudden disappearance from the series is unknown. They may have been threatening to the Rebels, but after such a brief appearance, we can hardly be either impressed or disappointed by them.

The Price of Power