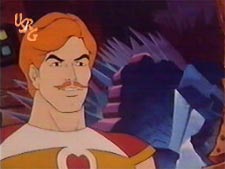 Featured Image taken from the episode “The Light of the Crystal”

Bow, voiced by George DiCenzo
First seen in the episode “Into Etheria” 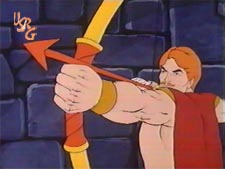 Bow is Etheria’s master archer. Kyle, from an early episode [09], describes him as “the best shot in all Etheria!” – a fair assessment, judging by the accuracy our leading man shows with a bow and arrow throughout the series. 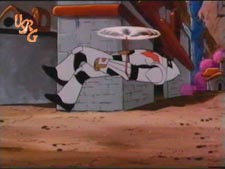 At times, Bow would state that his arrows had been made for him [01, 41, 49], so we are left to assume this person also had some sort of magical influence over his chosen weapon. 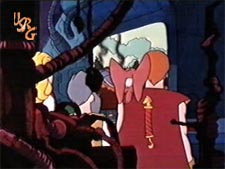 And like Adora would carry her sword on her back, Bow would also store his bow on his back. This, however, was only revealed in a couple of later episodes [88, 89].

Bow’s shooting talent wasn’t his only skill however – although his musical aspirations often left a lot to be desired. 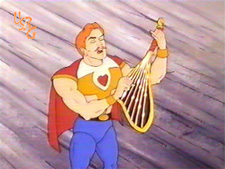 The writers, though, couldn’t seem to decide whether Bow was a talented musician or not – as sometimes episodes poked fun at him being tone-deaf, while others portrayed his music as another talent.

Kowl, however, was consistently critical of Bow’s musical prowess and made his opinion no secret [24, 37]. 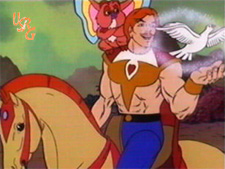 His specialist instrument was the harp, which he would sing along with as he plucked its strings.

Bow was portrayed as an illusionist on several occasions too. 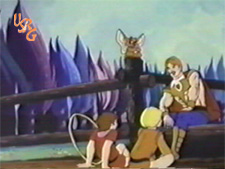 He was shown making a bird appear from nowhere in one episode [09], disappearing from sight himself in another [28], and he also made a deck of cards vanish into obscurity. [38]

To add to Bow’s position in the Rebellion as a warrior and his musical and magical ‘talents’, our main male hero was also a keen storyteller to the children of Etheria. [23, 74] 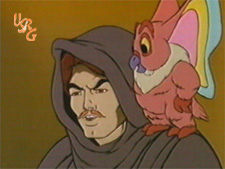 Bow was one of the original Rebels and seems to be on the Horde’s most-wanted list, as he would often have to disguise himself outside the Whispering Woods, in case he was spotted by enemies. [01, 26, 28]

The only other Rebels who had to do this are Adora, Glimmer and Madame Razz, indicating 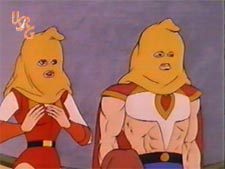 their collective notoriety to the Horde. 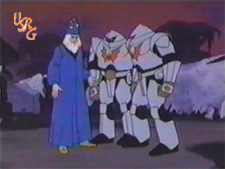 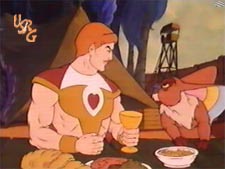 Although he was one of the main characters in the series, episodes would often focus on the fact that Bow, like Glimmer, should consider that his often childish actions have consequences.

On many occasions, Bow would be too eager to fight [29, 49, 66] and even admitted to finding it ‘fun’ [84], a pointer that would get him into trouble more often than not. 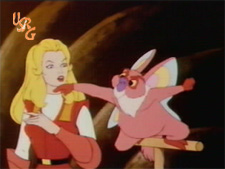 Bow and Kowl seem to have known each other for a long time, but for how long is unknown.

Their love/hate friendship is often played up melodramatically, with Kowl’s witty one-liners 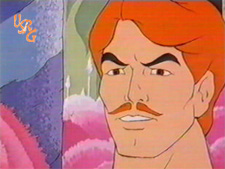 Bow is completely oblivious to Adora having a secret identity and never once cottons on to the fact that she and She-Ra are one and the same. 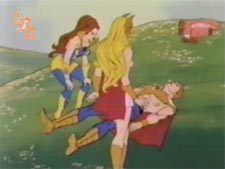 He does, however, express romantic intentions towards them both, ironically. 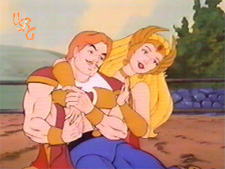 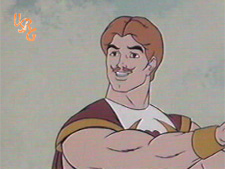 However, perhaps Bow would have fared better with Flutterina, with whom he also showed an interest. [68] Then again, after looking at his track-record, maybe not.

Into Etheria
Beast Island
She-Ra Unchained
Reunions
Battle for Bright Moon
Duel at Devlan
The Red Knight
The Missing Ax
The Prisoners of Beast Island
The Peril of Whispering Woods
The Laughing Dragon
Friendship
He Ain’t Heavy
A Loss for Words
Horde Prime Takes A Holiday
Enchanted Castle
Three Courageous Hearts
The Stone in the Sword
The Crystal Castle
The Crown of Knowledge
The Mines of Mondor
Small Problems
Book Burning
The Eldritch Mist
Bow’s Farewell
The Price of Freedom
Play It Again, Bow
The Reluctant Wizard
Friends Are Where You Find Them
Troll’s Dream
Zoo Story
Into the Dark Dimension
Glimmer’s Story
Enemy With My Face
Welcome Back, Kowl
The Rock People
Huntara
Micah of Bright Moon
Birds of a Feather
For Want of a Horse
Just Like Me
My Friend, My Enemy
The Wizard
Unexpected Ally
The Light of the Crystal
Loo-Kee Lends a Hand
Of Shadows and Skulls
Flowers for Hordak
Wild Child
The Greatest Magic

One To Count On
Return Of The General
Out Of The Cocoon
A Lesson In Love
Something Old, Something New
The Time Transformer
Above It All
Day Of The Flowers
Brigis
The Caregiver
When Whispering Woods Last Bloomed
Romeo And Glimmer
The Perils Of Peekablue
The Locket
Shera Makes A Promise
Bow’s Magical Gift
Glimmer Come Home
The Inspector
Portrait of Doom
Hordak’s Power Play
Shades Of Orko
The Bibbet Story