Featured Image taken from the episode “The Wizard”

First seen in the episode “Into Etheria” 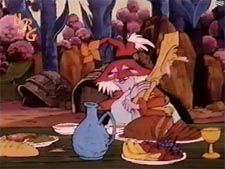 Broom is Madame Razz’s flying companion and joins her on every mission.

Broom and Madame obviously have a history, but that history is rarely touched upon. 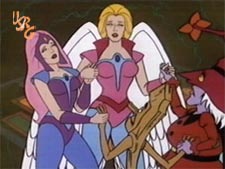 From the evidence in certain episodes, it would appear that Madame hasn’t always been with Broom, while Broom has had experiences away from his magical friend too. 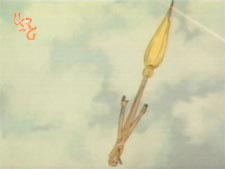 For example, Razz’s on-off relationship with Frit was news to Broom [30], just as he had heard that Ahgo had seen the Crystal Castle, which Madame was oblivious to. [22]

Broom is a magical being, evidenced once when he joined forces with Queen Angella, Glimmer and Madame Razz to magically defend Castle Bright Moon. 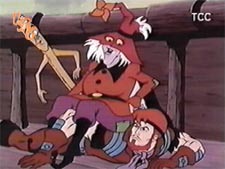 Broom’s speed was often of use to the Rebellion, allowing him to escape the firepower of Hordak’s Troopers [33], zip in to catch Madame Razz from a great fall [69], and evade capture by the Monstroids while carrying not one, but two passengers. [75] 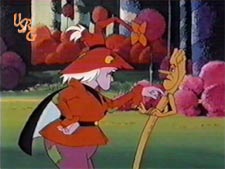 However, his flying, alongside Madame’s navigation, has also caused comedic set-backs.

He has crashed into trees and bushes multiple times, but also Sea Hawk [16], a random dinosaur [44], and had a narrow escape with the vicious Vultak. [74] 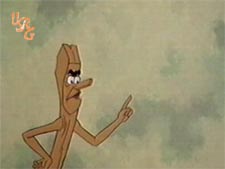 Like Bow and Kowl, Broom and Madame Razz have a tempestuous relationship.

More often than not, Broom will find something to disagree with Madame over [24, 53, 64] and vice-versa. 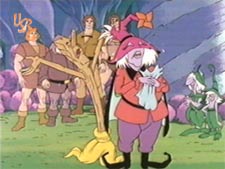 He also likes to have a sly dig at her age [20, 44], but always has her best interests at heart – examples include fixing her up for a date with Frit [30], challenging Kowl in Madame’s defense [43] and advising her to ‘hold on tightly’ when flying! [70] 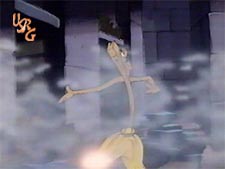 He also has a habit of correcting his mistress’ magical mistakes and gets them right more often than not. [06, 20, 48]

Broom was possibly one of the campest characters of the series, something that made his comedy all the more unique. 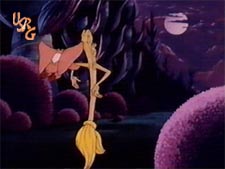 From crying endlessly with Madame at Angella’s return to Bright Moon [04], to dancing his way through a dusty pile of old books [20], and virtually strutting arm in arm with Kowl to find an old wizard [53], Broom’s unintentional theatrics are a welcome, if unexpected, addition to the show.

Into Etheria
Beast Island
Reunions
Battle for Bright Moon
Duel at Devlan
The Prisoners of Beast Island
The Peril of Whispering Woods
King Miro’s Journey
Friendship
Return of the Sea Hawk
Horde Prime Takes A Holiday
Enchanted Castle
Three Courageous Hearts
The Crystal Castle
The Mines of Mondor
The Eldritch Mist
Play It Again, Bow
The Reluctant Wizard
A Talent for Trouble
Into the Dark Dimension
Enemy With My Face
Welcome Back, Kowl
The Rock People
The Price of Power
Birds of a Feather
My Friend, My Enemy
The Wizard
Loo-Kee Lends a Hand
Of Shadows and Skulls
Wild Child
The Greatest Magic

One To Count On
A Lesson In Love
Something Old, Something New
The Time Transformer
Above It All
Day Of The Flowers
Brigis
The Caregiver
When Whispering Woods Last Bloomed
The Locket
Shera Makes A Promise
Glimmer Come Home
Portrait of Doom