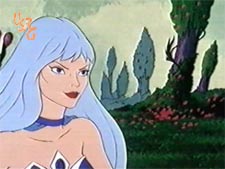 Featured Image taken from the episode “Day Of The Flowers” 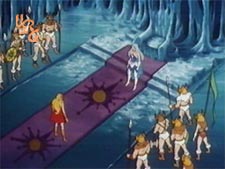 Frosta is the Ice-Empress of Etheria.

Frosta resides in the Kingdom of Snows as the reigning queen of Castle Chill. 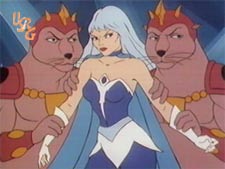 Only once has the Horde made any kind of assault on Frosta’s home and her people [58] – perhaps because of the distance between her domain and the Fright Zone or maybe due to the powerful ice magic possessed by the Queen.

Frosta’s people have endured a long-term feud with the Selkies, a race of sealion-like creatures 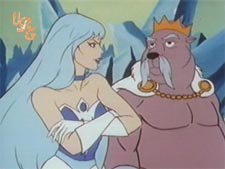 from the neighboring Galacia.

The two tribes made a truce when the Horde invaded, indicating that the Horde had, at least once before, made themselves known in the snowy lands. 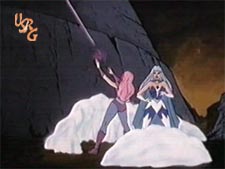 Since then, the Snow People and the Selkies declared war on each other, after hatred was stirred up by Modulok.

The dispute was settled by She-Ra and Frosta and the two tribes now coexist in peace.

Frosta’s ability allows her to 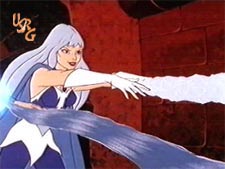 Frosta’s ice magic has great power and is capable of smashing through steel [58] and also offers her a nifty method of transport, by which she would 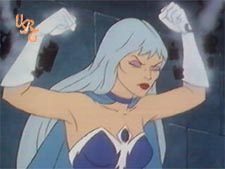 In the first season of the show, the Ice Empress appeared mostly in cameo roles, attending banquets and ceremonies [18, 20] or aiding the Rebels on missions. [39, 55] 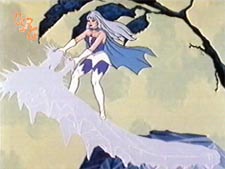 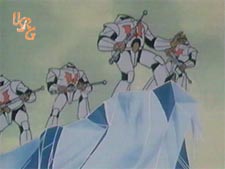 Season 2 would only give her another couple of appearances, which were fortunately enough to showcase more of her character – and a flirtatious one at that, specifically aiming her advances at She-Ra’s brother, He-Man.

She was rejected, however, and he instead took a shine to Sweet Bee, much to Frosta’s dismay. 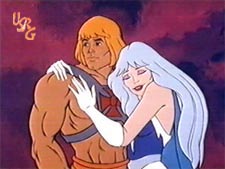 You can’t keep a good woman down though – Frosta continued to try and seduce He-Man, much to the amusement of She-Ra, Mermista and, of course, us in one of the show’s most celebrated episodes. [85]