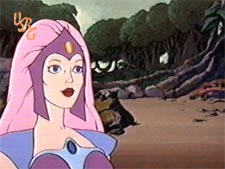 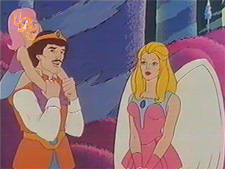 Glimmer is the daughter of Queen Angella and King Micah of Bright Moon and former leader of the Great Rebellion.

After Micah left to fight the Horde when Glimmer was a little girl, she and her mother Angella lost all hope for his return. [46] 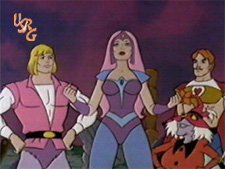 Coming from a once happy family, Glimmer was distraught when her mother too disappeared in a battle.

For years, nobody knew what had happened to Angella, until a spy discovered that she was being held prisoner by Hunga, queen of the Harpies of Talon Mountain. [04] 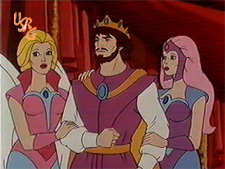 By this time, Glimmer and a group of villagers had formed a rebellion against the Horde. [01]

Glimmer, however, left the post to Adora when her mother was rescued by He-Man and She-Ra and she returned to her position as Princess of Bright Moon. 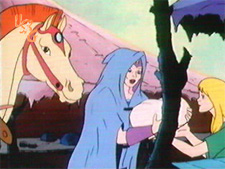 Her father would return briefly, but would soon leave again to help free other worlds that had been enslaved by the Evil Horde. [46]

Like Bow, Madame Razz, and Adora, Glimmer’s position of authority made her all the more recognisable when out in public, hence the need for a disguise when outside the safety of Whispering Woods and Bright Moon on her own. [55]

Glimmer has inherited powers over light from her mother.

The vast range of abilities this grants her include releasing energy bolts from her hands [05, 66, 77], dazzling brightness from her chest [63] and also creating flashes out of nowhere. [24] 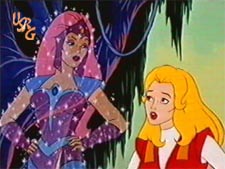 Other, less prominent powers for Glimmer were showcased throughout the series too – her ability to disappear and then re-form [01], teleport [02, 25], and also fly [67, 88] are just some of these.

The latter, however, was a season two addition, as Glimmer was incapable of saving herself from a cliff fall once in season one. [46] 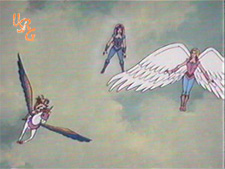 In one instance, Glimmer was also able to make herself and other Horde captives invisible, allowing her to escort them out of the Fright Zone dungeons unnoticed. [80] 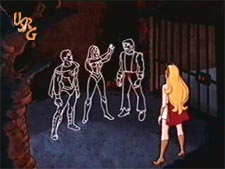 Her energy, as we would see on several occasions, was finite and could run out at any given time or place.

Using her powers too often or for too long could exhaust Glimmer immensely. [02, 63, 74] 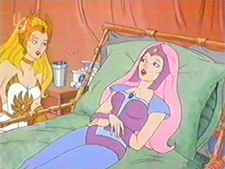 As the series progressed, Glimmer was often portrayed as a hot-headed young lady, rather than the independent woman we meet in the first few episodes of the show.

Lessons in not hurting others [10], humility [25] and patience [68] are just a few that Glimmer encountered in her tenure as a main cast member. 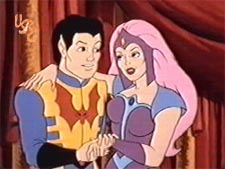 Like several of the other rebels, Glimmer had romance on her mind at times.

Bow once mentions that she used to find him attractive. [41]

However, he was more interested in Adora/She-Ra and Glimmer soon turned her affections to a 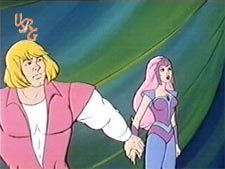 However, she would have to fight Castaspella and possibly Sweet Bee and Frosta for the latter!

Into Etheria
Beast Island
She-Ra Unchained
Reunions
Battle for Bright Moon
Duel at Devlan
The Red Knight
The Peril of Whispering Woods
He Ain’t Heavy
Horde Prime Takes A Holiday
Enchanted Castle
Three Courageous Hearts
The Stone in the Sword
The Crystal Castle
The Mines of Mondor
Small Problems
The Eldritch Mist
The Price of Freedom
Play It Again, Bow
Into the Dark Dimension
Glimmer’s Story
Huntara
Micah of Bright Moon
Birds of a Feather
My Friend, My Enemy
Unexpected Ally
The Light of the Crystal
Loo-Kee Lends a Hand
Flowers for Hordak
Wild Child

One To Count On
Return Of The General
Out Of The Cocoon
Something Old, Something New
Above It All
Day Of The Flowers
The Caregiver
Romeo And Glimmer
The Perils Of Peekablue
Just The Way You Are
The Locket
Bow’s Magical Gift
Glimmer Come Home
Portrait of Doom
Shades Of Orko