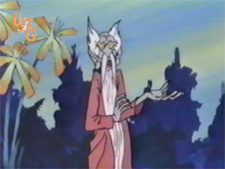 Madame Razz is the scatter-brained rebel witch, who is always willing to lend a helping hand. 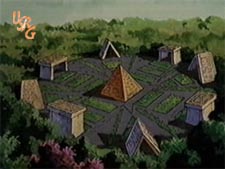 Whereas Orko from the He-Man series was simply a poor magician because of the contrasting makeup of his world and Eternia, his Etherian counterpart Razz fails because of a tendency to forget spells, which is attributed to her age.

In fact, the only person on Etheria we have met 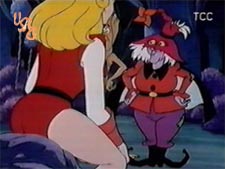 who is older than Madame is a nameless wizard who lives in a tree, stranded in the middle of the desert. [31]

Her true age is never stated, but we do discover that she once lived in Serenia, a beautiful and enchanted part of Etheria, 500-600 years prior to joining the Rebellion. [70]

However, they say that with age comes experience and Madame Razz bears no exception. Her knowledge of ancient Etherian legends and past events has been been invaluable to the rebels on several occasions.

She knows various powerful wizards from across the planet [47, 70], the effects of mysteriously lethal fruit [51] and even shows a particular wisdom on social issues [16, 66, 77] – most often to the benefit of Adora.

One would assume that such an old witch would have a lot of history to her. However, Madame is one of those characters whose past is never fully explored. 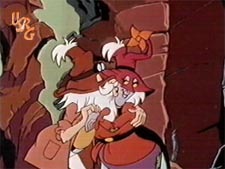 Aside from her life in Serenia, the closest she has to a backstory involves a romantic dalliance with Frit, another elderly character.

The two dated a while back, but when the Horde arrived on Etheria, Madame Razz could not rest until Etheria had been freed from their menace. Frit promised to wait for her, although their time apart showed clear strains on Madame’s patience. [30] 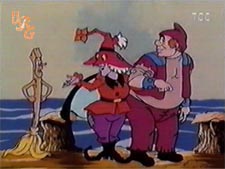 He waited for her, as she asked after a surprise reunion, and suddenly popped up again later on in the She-Ra series. [88]

On a side note, Madame also seemed to show a romantic interest in Swen, one of Sea Hawk’s mates [16], but this was never explored again after their first meeting. 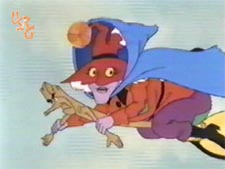 Madame Razz, like Adora, Glimmer and Bow, is also a ‘wanted’ Rebel, as her having to go out in disguise suggests. [31]

Now a part of the Rebellion and living in a cottage within Whispering Woods [52, 70], Madame has befriended a flying broom, cunningly called Broom, who frequently makes digs at her age [02, 44] and corrects her spells. [20, 48] 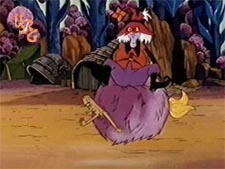 The two seem to have known each other for a long time, but as Broom didn’t seem to know Frit, Madame’s love-interest, we are left to assume that the pair met after the Horde’s invasion of Etheria.

Making for a comical duo, not only do Madame and Broom bicker a lot, they also have trouble getting from place to place. 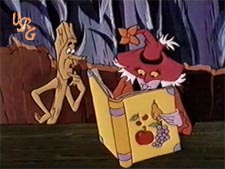 Having crashed into people, rocks and bushes when riding Broom, it would seem that Madame Razz’s attempts at navigation are not helped by Broom’s often disastrous flying. [22, 55, 78]

Her backfiring spells, less than appetizing meals [83] and, of course, her old age have all led Madame to assume that she is more of a liability than a help to the Rebellion. [20, 43] 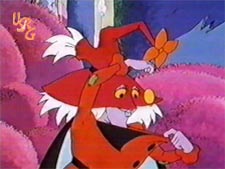 However, as we see time and time again, the Rebels love Madame for being exactly what she is to them – a friend. And given her role as comic relief on the show, it seems fitting to mention that she once used her cleavage to save a precious locket for good keeping. [64] Because why wouldn’t you?

Into Etheria
Beast Island
She-Ra Unchained
Reunions
Battle for Bright Moon
Duel at Devlan
The Missing Ax
The Prisoners of Beast Island
The Peril of Whispering Woods
King Miro’s Journey
Friendship
Return of the Sea Hawk
Horde Prime Takes A Holiday
Enchanted Castle
Three Courageous Hearts
The Crystal Castle
The Mines of Mondor
The Eldritch Mist
Play It Again, Bow
The Reluctant Wizard
A Talent for Trouble
Into the Dark Dimension
Glimmer’s Story
Enemy With My Face
Welcome Back, Kowl
The Rock People
The Price of Power
Birds of a Feather
My Friend, My Enemy
The Wizard
Loo-Kee Lends a Hand
Of Shadows and Skulls
Flowers for Hordak
Wild Child
The Greatest Magic

One To Count On
A Lesson In Love
Something Old, Something New
The Time Transformer
Above It All
Day Of The Flowers
Brigis
The Caregiver
When Whispering Woods Last Bloomed
The Locket
Shera Makes A Promise
Glimmer Come Home
The Inspector
Portrait of Doom