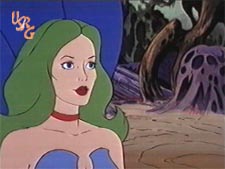 Featured Image taken from the episode “The Perils Of Peekablue”

Peekablue is a Rebel with Peacock-feathers that see in all directions. 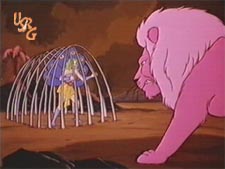 Had she been in more episodes and a bigger part of the Great Rebellion, Peekablue could have proved to be one of the most useful additions to the side of goodness.

Sadly, when Mattel designed her for release in the Princess of Power toy line, the power they gave her was hardly physical and didn’t exactly suit the world Filmation created for the series. 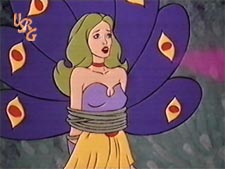 One possible option was to identify the character as a wise, all-seeing goddess who wouldn’t assist the Rebellion in battle but be more of a human counterpart for Light Hope. [He-Man and She-Ra: A Christmas Special]

The other option, followed closely by the actual series, was to show Peekablue as a loner who would help the Rebellion but prefer to stay out of the way of the Horde, simply due to her lack of physical strength. [80] 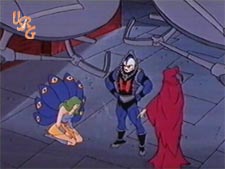 She was a very nervous character, terrified of Catra, Clawdeen, Hordak, Shadow Weaver and the Horde Troopers – and this just shown in two episodes. [66, 80]

Because of this, she was too frightened to even move to the Whispering Woods. 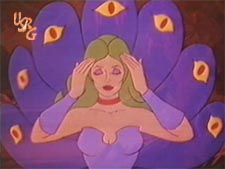 She assumed that the Horde wouldn’t bother her living so far away, but she obviously didn’t know Hordak very well.

However, even though she was petrified to her very soul by the simple sight of a couple of Evil-doers, Peekablue wasn’t afraid to let them know that she had no intention of helping the Horde and that her ability was never to be used for evil purposes. 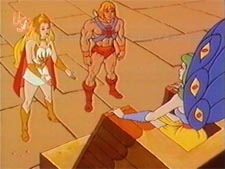 Her power was to see in all directions and for great distances, via her enormous Peacock-feathers that would spread when required – the power could be used locally, as her prediction of an oncoming attack proved, [66], nationally when she used her ‘multi-vision’ to detect the whereabouts of Orko’s capture, [He-Man and She-Ra: A Christmas Special] and universally, as she told Adora of her brother’s antics with Cringer on Eternia. [80]

It would appear that this gift needs a great deal of concentration, though once activated could be sustained. 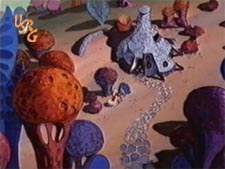 Finally, along with the two options of Peekablue’s persona, her first big appearance saw her sitting on a thrown in a temple-type residence, indicating some kind of high status. [He-Man and She-Ra: A Christmas Special] However, when we saw her in another residential area, Peekablue seemed to live in some sort of far-away cottage and therefore sticking with the idea of being a loner, almost completely cast away from society.

One To Count On
Something Old, Something New
The Perils Of Peekablue