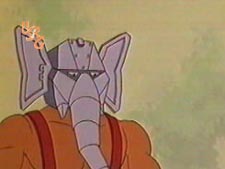 Featured Image taken from the episode “Out Of The Cocoon” 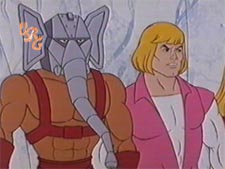 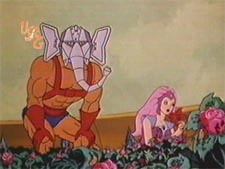 toyline and appear in She-Ra, along with the regular Princess of Power cast.

However, in a similar way to the Snake Men, Tung Lashor and Rattlor, the writers couldn’t quite decide where he belonged.

They were sure he fought on the side of 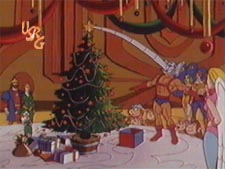 goodness, but his appearances – which were sparse at best – saw him flip-flopping between the Eternian Heroic Warriors [75] and Etheria’s Great Rebellion. [25, 68]

He is announced as one of Prince Adam’s friends from Eternia in one episode, [75] but then seems to bear no apparent links to the planet in others. 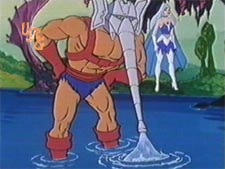 He-Man and She-Ra: A Christmas Special sees him at the Royal Palace of Eternia, along with Rebels and Heroic Warriors, but as he is in the company of both, it is impossible to distinguish his association.

Confusingly, the Rebels referred to him as Hose Nose, rather than the name Mattel gave him. 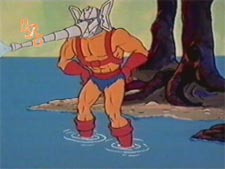 Even more confusingly, when he re-appeared in Season Two, alongside Prince Adam, the writer opted to stick with Mattel’s name for him.

It is quite likely that ‘Hose Nose’ was an early name for the character, which was later rejected in favour of Snout Spout. 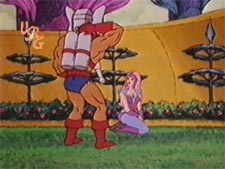 Snout Spout’s powers are simple – spray absolutely anything with water from his trunk. And that’s about as far as it goes.

We do know that water can either be drawn in through Snout Spout’s trunk and then flushed out [25, 75] or it can be stored in the tank on his back and released at the flick of a switch. [68]

Out Of The Cocoon
Day Of The Flowers