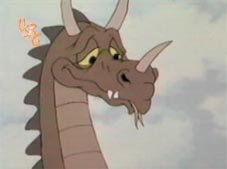 Featured Image taken from the episode “The Laughing Dragon” 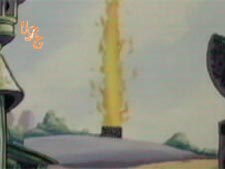 Sorrowful is a cowardly dragon and a friend to the Rebellion. 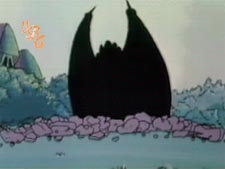 slumber after throwing a stone down the disused well the dragon had been resting under.

Thinking the great beast would be dangerous, Adora and Bow ran for cover.

But Sorrowful was timid and scared – so much so that he made Kowl look like a fierce warrior. 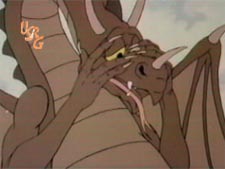 In a “Wizard Of Oz” style attempt to find Sorrowful some courage, his new-found friends took him to Castaspella in the hope that she would have a spell that would be able to help.

As it happened, none of their efforts could boost Sorrowful’s lack of confidence.

She-Ra, however, tricked him into believing that a magical flower necklace could provide him with all the courage he needed to help his friends fight off a Horde attack.

When Sorrowful conquered his fear with the ring of flowers around his neck, the truth was revealed – the magical flowers weren’t magical at all. 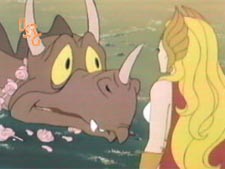 Sorrowful’s courage came from the heart. [12]

If, however, the series was to be followed chronologically, the dragon’s discovery of his 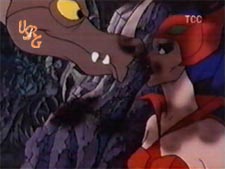 courage had no effect on him, as he kept this character trait until his last appearance.

His second (or first, depending on which way you look at it) appearance saw him reluctantly confront Catra and prove to her that he was, in fact, a force to be reckoned with when his friends were in trouble. 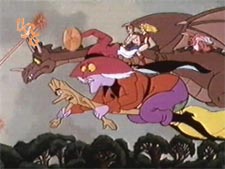 By the time he appeared for the third time, [82] Sorrowful’s cowardly nature had been abandoned in place of a far more confident, but still comic, demeanour. 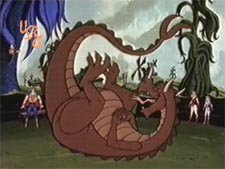 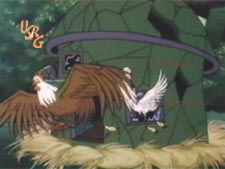 Besides his previous lack of courage, the essence of many of the jokes involving Sorrowful played on the fact that he was at least three times the size of his human counterparts. Not only was he ticklish, but his tail also proved a regular hazard, knocking chicken coups and even houses this way and that! [12]

The Prisoners of Beast Island
The Laughing Dragon