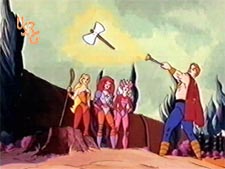 A group of young siblings was due to be released as part of Mattel’s fourth wave of Princess of Power toys, but it never happened. The only encounters the public had with the mysterious Star Sisters were from promotional photographs of the toys, a story in an American comic, and briefer-than-brief cameos in the Filmation cartoon. 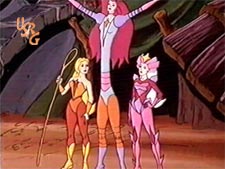 A single episode promotes the sisters as if their action figure counterparts were on toy shelves there and then. They add nothing to the story in which they appear and instead stand around watching Bow show off with a magical artifact he stole from Shadow Weaver. [84]

Each sister delivers a single line of dialogue and has their names mentioned individually, but the only to as much as move from her stock footage positioning is Tallstar, who demonstrates her ability to stretch to great lengths when she retrieves Spragg and Sprocker from on top of a floating rock, magically defying gravity by Bow’s stolen wand. 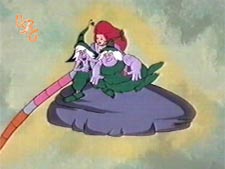 Incidentally, the powers the other two were to use, are not dissimilar to others from the series. Starla warns of impending danger, much like Peekablue, and Jewelstar folds into a small gem, reminiscent of the Rock People, to mislead enemies.

The following is a transcript proving just how
brief the appearance of The Star Sisters is:

Adora: Bow, what in the world are you doing?

Bow: This wizard’s wand of Shadow Weaver’s is fantastic!

Jewelstar: Bow, how did you do that?

Bow: Look at this power! Not only can it hold the Twiggets, it can lift this boulder!

Adora: Bow, bring them down!

Since their non-start in the 1980s, the Star Sisters have now been immortalised in plastic as part of 2012’s Masters of the Universe Classics collector line and in 2016 original prototypes of the characters were discovered and unveiled to astonished fans at He-Man and She-Ra convention Power-Con.